In the spring of 1987, I set off to work in a country I knew nothing about – Yugoslavia. I was working there as a musician for six months and this trip would change my life. I would meet my wife, gain a new family but most importantly get to see the world from a completely different perspective and that is something that’s shaped my outlook ever since.

There was another unforeseen benefit that became apparent as soon as we arrived and that was the achingly beautiful coastline and magical historic towns Istra is renowned for. Istra is the region in what is now Croatia where I was living and working and the resort that from that moment on became my second home is Rabac. Now, more than twenty five years on, the coastal trails and paths that surround it are my sanctuary, whenever we “go home”.

I first began walking there almost as soon as we arrived in April 1987, mainly because the sea was at that point in the season freezing. To us pasty new arrivals, the weather was really hot (although the locals were still wearing their winter coats) and being unable to cool off in the sea, I fell back on my base instinct and sought shade by exploring the wooded trails.

The coastline is rocky and the tracks and paths are too but many of them date back to a time before Rabac itself was little more than just a few fishing houses, so they are well bedded in. The white rocks and pebbles that define the coastline and beaches also define the trails at sea level, although higher up, the rich terracotta top soil is more prominent.

Paths in Rabac are most often dry and firm, except after periods of wet weather but even then the stony routes drain quickly and are soon dry again. The more earthy tracks can get a bit sticky when wet but nothing like muddy routes in Britain, mainly because they don’t have anywhere near the footfall our paths do. 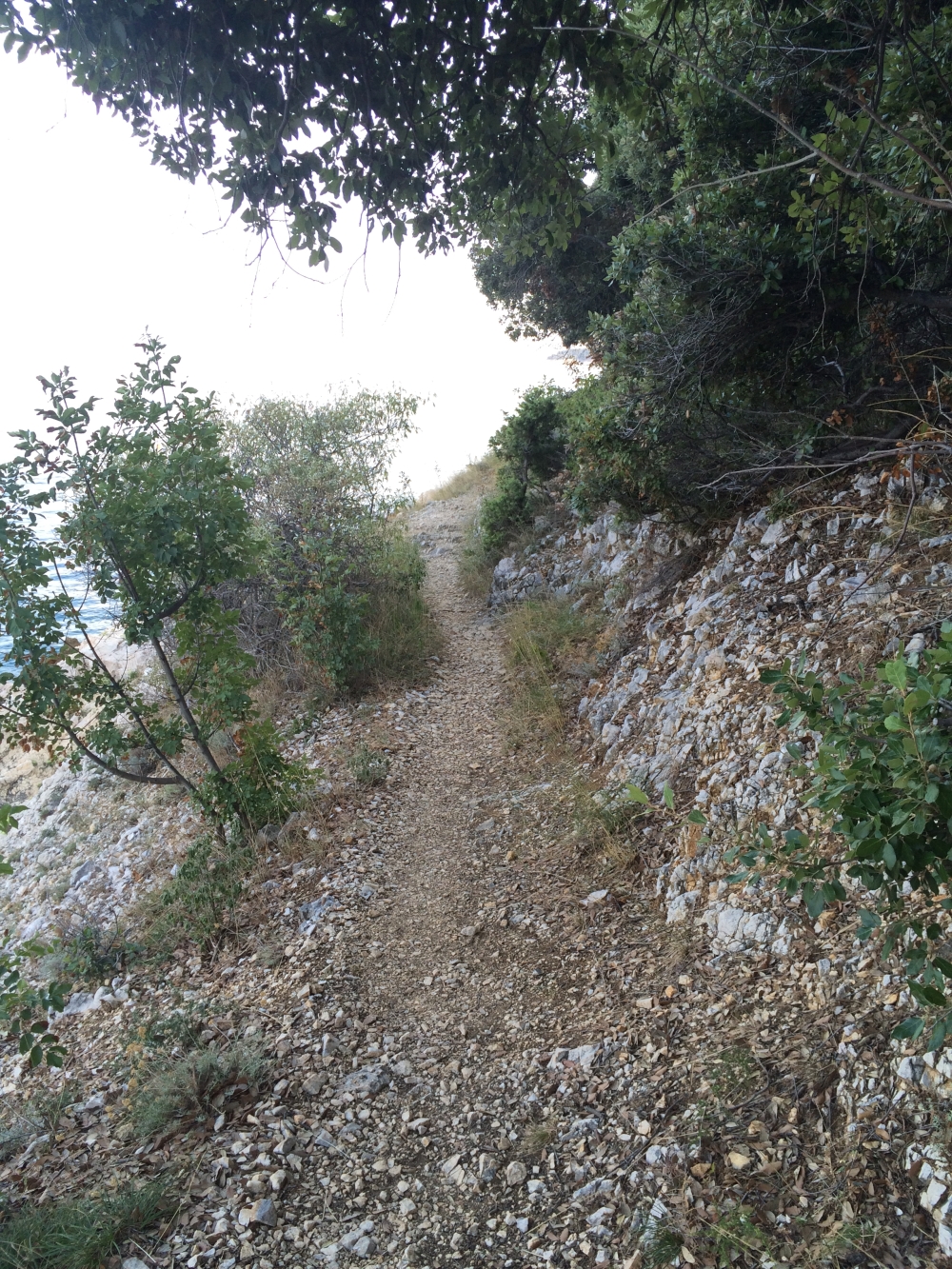 Mid summer in Croatia can be scorching, with temperatures up in the forties but either side of peak season is lovely. September is considered the best month by locals and I’d agree. It’s still hot but not excessively so. The sea is really warm after a season of baking temperatures but the air temperature is much more friendly. There’s also a really relaxed feeling in resort. Schools have gone back and it’s really just the tail enders visiting. ‘Ferrogosto’ has been and gone and the mass invasion of Italian holiday makers has subsided for another year. Locals are starting to wind things down ahead of Autumn’s arrival but there’s still a good couple of months left to enjoy Istra’s delights.

This year, when we went home in September, I went armed with a new plan – to use one of my favourite trails for training. I’d always previously walked to explore, to relax or quite often just to reach the more remote beaches to go free diving, so I was keen to find out how these paths I knew so well might stack up as a training resource.

Rabac sits at the bottom of a hilly section of the eastern Istrian coast, that snakes all the way from the tip below Pula to Rijeka and beyond. In fact, there aren’t many parts of the peninsula that are flat at sea level apart from the key resorts of Pula, Poreč and Rovinj on the western side.

The route I used both for walk and run training was a path that has been a critical link between the sea and the historic hill town of Labin above it for centuries. It’s a path I’ve loved since 1987 and always love to walk it every time we go home. There’s a waterfall, a spring, a cascading stream, steep rocky switchbacks and steep narrow paths. It has a little bit of everything and you’d have to walk it twice a day, every day to grow tired of it. 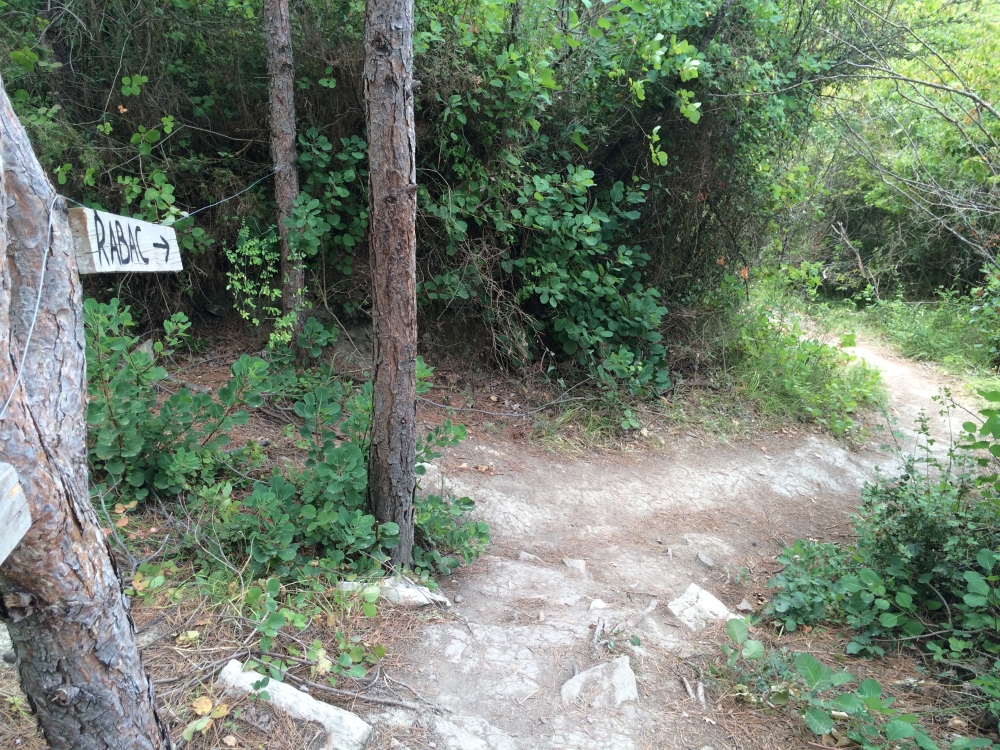 It’s only a short route, just over 3k or 6k both ways but you don’t walk it for the distance! I’d classify this trail a ‘super sprint’ and for me it was all about going as fast as possible, like a short mountain time trial. It’s also great training for moving quickly over rocks and tricky terrain, particularly when descending fast.

Starting in Rabac, the path rises up to the waterfall and then the rocky switchbacks kick in. After these, it eases off and the trail snakes through the trees, crossing the stream before climbing again. After some natural rock steps I found that the the trail had been diverted from its original route, which at first annoyed me because it seemed that the land had just been sold or claimed for private use but actually, by the time I’d topped out, I’d changed my mind.

The new section turned out to be an improvement, both physically (with more testing terrain) and visually, with the path easing its way through large boulders and up steep gullies. At the top there are a couple of steep sections before the path breaks out onto the road below Old Labin but this isn’t the end.

Old Labin is a historic focal point and a real attraction in its own right. It’s like many Istrian hill top towns with a tall tower at the top in the centre and circulating terraces of houses all around it, that look a bit like castle fortifications. The old town is perched on top of a mound covered in tall pines and there’s a network of paths criss crossing the slopes that lead you to the absolute top of the route – a final ramp of stone slabs up to a small viewing terrace.

From the terrace, you get a wonderful view across to Učka mountain to the north and back down to Rabac and the island of Cres.  When you’re done with the view you can easily follow the narrow paved walkways through the old town’s streets down to the main town square and from there back down the road to the path down to Rabac.

It is a lung buster this route, if you go ‘all in’ like I did but it’s so short that it’s easy to recover. It’s a trail I know many reading this will never get to walk but I guess the point of this post is not so much about this particular destination (it’s a hell of a long way to go for a 3k trail).

This is more about looking again at trails or routes that previously you might not have considered suitable for sport walking because of their length – small hills or challenging paths under 5k. There’s real benefits to be had from short fast hill work or even going for your maximum speed on the flat over a ‘super sprint’ distance. It’s a bit like your ‘one rep max’ in the gym.

If you can utilise these trails – focus on what you can do with them not on what they might lack – you’ll not only have more options to play with but you’ll also be able to train on paths that perhaps you love to walk for leisure and that’s got to be a good thing.

Of course, if you are looking for somewhere to go for a summer break and want to do a bit of training on the side, then go to Rabac, you won’t be disappointed!