The La Sportiva ‘Akasha’ is a Mountain running endurance shoe, designed for long distance routes and ultra marathons, with an emphasis on cushioning. 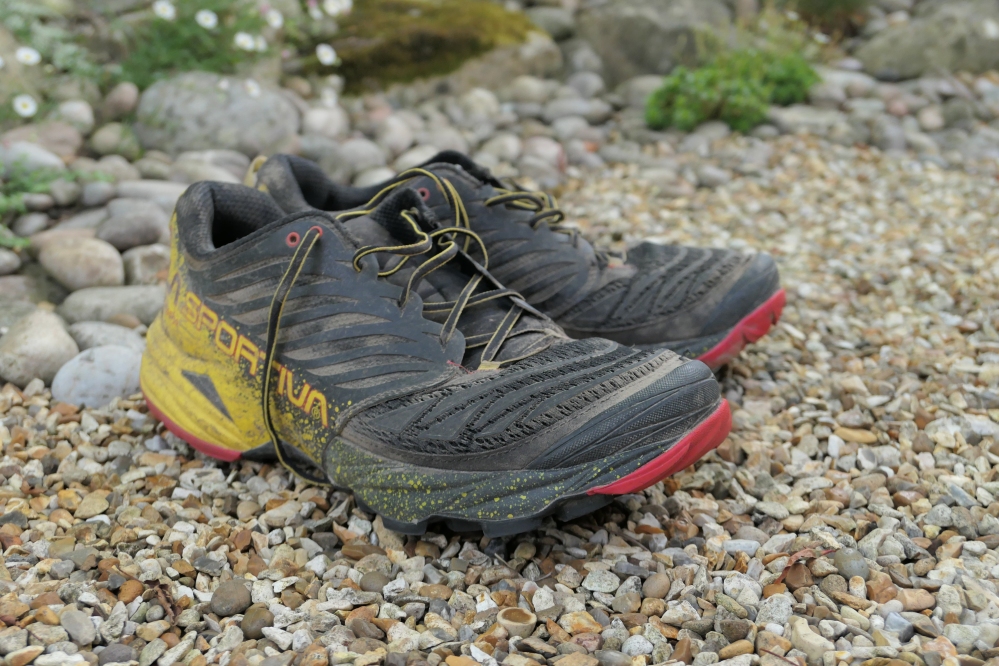 Now this can often be a double edged sword for walking – what’s good for running, when you have greater impact as you land your feet, can be completely wrong for walking if the cushioning is too soft.

So the big question is – are they any good for Sport Walking?  Well, the simple answer is yes, very good actually!

I’ve been wearing Akashas for over six months now and used them for Race to the Stones and the Salisbury 54321 50k event, as well as for all my training, so all in all they’ve seen almost 1,000 km of action.

“If you’re used to boots, trekking shoes or some approach shoes, Akashas will feel feather light”

What I like about this shoe is that it strikes a really good balance between cushioning and stiffness. Now, by stiffness, I must repeat these are running shoes, so they’re more flexible than many walking specific shoes but compared to other running shoes, the Akasha delivers a degree of stiffness through the sole that makes walking in them really good.

To give you a comparison – my Mutants, which are more suited to Sky running, give just as comfortable cushioning as Akashas but with more flex in the sole, so they’re great on rocky ridges and fast mountain ascents but for general walking, the greater flex puts a bit more strain on your toes and tendons over longer distances.

On the cushioning side the Akashas deliver a good level of shock absorption but they’re not too soft, so they can carry you comfortably over really long distances without sucking the drive out of your legs. In short, the cushioning level is near perfect and the stiffness versus flex in the sole gives you just the right walking action.

Technical Information
The uppers are breathable with a fine plastic exoskeleton to give structural support, which I found to be really effective.

Akashas are rated by La Sportiva as wide fitting but I think this is more ‘wide’ in the context of the Italian fit, which is generally recognised as narrow – I’ve got narrow feet and these are certainly not wide!  What they are though is wide enough to allow your toes to spread and your feet to expand with heat, so in effect they’re higher volume around the toe box and that’s a good thing, especially when you’re going long.

The plastic structure on the uppers also provide for great lacing adjustment. The narrow slits that the laces run through lock them off as you tighten them and there’s very little slippage. It means you can lace up and set off and then easily tweak them for comfort.

The drop of the sole is 6mm, which is less than some ultra or mountain running shoes but for me this was near perfect to give a good walking action. As I said before, the cushioning from the mid sole was spot on, as was the outsole, which is one of La Sportiva’s strong points. They’re one of the leading mountain boot manufacturers and if they know one thing, it’s how to make superb grippy soles!

The lugs on the sole of the Akasha are not the deepest but then with deeper lugs, when you hit hard pack trails or tarmac you can get that squidgy feel, so I think the lug depth is just about right for walking and the reversed lug position on the heel helps with breaking on steep descents.

I did find that on wet and greasy chalk or really thick mud, they did slip but to be honest, not more than any other shoe I’ve ever used and, again, if they had a deeper lug on the sole you’d be compromised on harder packed ground, so I think really they’ve got the balance just about right.

The only negative I had personally, and I wouldn’t want to say this is actually a negative about the shoe, is that I had trouble with my ankles rubbing on the side of the uppers. Now, I’m not going to mark the Akashas down for this because we all have different limbs and we all come in different shapes and sizes. It could just as easily be that my ankle bones are in the wrong place as it is that the ankle cuffs are a bit high.  My wife, for example bought a pair of Akashas and they fitted her like a glove straight out of the box.

My solution was actually really quite cheap and very simple. I just bought a pair of basic 3mm insoles and put them under the standard foot beds, which raised my feet up just enough to clear the ankle cuffs. Job done! I’m also a big believer in ‘double socking’ and with a couple of nicely cushioned socks on each foot, my ankle rubbing issues were a thing of the past.

The weight of these shoes is, I think, pretty good. If you’re used to boots, trekking shoes or some approach shoes, Akashas will feel feather light. Compared to some trail or mountain running shoes they’re on the heavier side, so once again, the best way to put it is that they give a good balance between weight saving and structural support.

The last thing I think I probably need to mention is an aspect it would be wrong to overlook in any review of La Sportiva shoes and that’s the look!  Compared to some shoes in their range, Akashas are really quite demure but I think they’re still quite striking, so they’ll probably have more of a broad appeal for general Sport Walking.

The Akasha is really quite an adaptable shoe.  Yes, I use different shoes for different environments but I could just as easily use Akashas for everything.  They’re good on rock, feel great on paths and bridleways and also provide good cushioning on tarmac.

The RRP is just under £150 but you can pick them up from some retailers for just over 100 or for even less on sale.

So, to sum up. The La Sportiva Akasha could just be the only Sport Walking shoe you’ll ever need but then, let’s face it, buying new kit is a bit of a pleasure in itself, so that wouldn’t be much fun!  So lets just say these shoes are perfect for Sport Walking!

They’re supportive, give just the right amount of cushioning, have a superb blend of flex and stiffness in the sole and fit snugly with a good amount of room for the toes.

Learn more about the La Sportiva Akasha here (this is not an affiliate link).